Writing in the New York Times today Coral Davenport makes a strong claim about typhoons in the Philippines:

A series of scientific reports have linked the burning of fossil fuels with rising sea levels and more powerful typhoons, like those that have battered the island nation.

I am unaware of any scientific report that has linked the burning of fossil fuels to more powerful typhoons, whether they have hit the Philippines or not. Via Twitter I have challenged Davenport to substantiate her claim (she is correct about sea level rise).

That’s not really fair of me, because she can’t. The graph at the top of this post comes from a 2009 paper by Kubota and Chan (here and here), which concluded “no trend is found.”

Below is a graph from a post I did last year when the exact same false claims were made following the disastrous landfall of Haiyan. That data comes from the Weinkle et al. dataset of global landfalls. It shows all landfalls in the western North Pacific, the region which includes the Philippines. 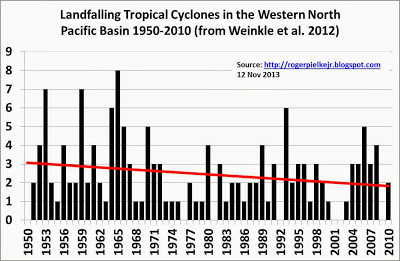 No matter how you parse the data, on climate time scales tropical cyclones, including the most powerful ones, have not become more common in the Philippines, the western North Pacific or on planet Earth. Last year I wrote in the Guardian that the science of tropical cyclones (and disasters more generally) provides a great test case study in adherence to scientific integrity when data is inconvenient.

To learn more, please have a look at my new book which summarizes the state of the science.

10 thoughts on “Typhoons in the Philippines”