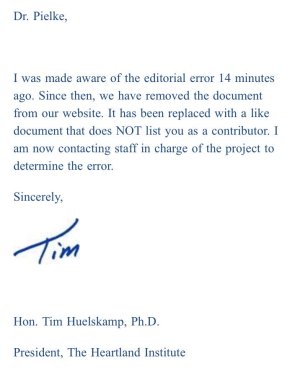 UPDATE: I received the email above from the president of the Heartland Institute. I appreciate his speedy and positive response to my request. Michael E. Mann has not corrected the record and leaves his Tweets on this up.

It has been called to my attention that I am listed in a report by the Heartland Institute as a member of a task force of theirs  and contributor to a new report. This is false in both instances.

I have never had a relationship with The Heartland Institute and never will. Heartland has once before falsely listed me on their website as a collaborator. They took it down when requested.

I have emailed Heartland Institute to demand that they remove my name from the report and also apologize for the false claim.

This is incredibly unethical behavior by Heartland and Mann. I am requesting that both stop and act positively to correct the factual record. Twitter spreads misinformation quickly. Do the right thing.

There was collusion. The image above of course comes from my infamous article that led the Center for American Progress to orchestrate a well-organized campaign to have me fired as a writer for FiveThirtyEight. Bizarrely, that campaign against me came to light via John Podesta’s hacked emails, released by Wikileaks during the 2016 presidential campaign. Below, I’ll share some new research on floods and tropical cyclones which further buttress the findings of that 2014 article that caused so much of a stir. It’s still as scientifically accurate today as it was then. Facts first.

Welcome to issue #9 of my occasional newsletter on climate and energy issues. As a reminder, my day-to-day research or writing is focused on sports governance and various issues of science policy. But I’ve written a fair bit on the topics of climate and energy over the past 25 years, including two recent books and a boatload of academic papers, and I’m paying attention. So caveat lector!

A few things to say up front:

Upcoming Talk at the University of Minnesota

Are We Finally Moving Past the Delegitimization of Climate Realism?

Everywhere you Look, There It Is: Zombie Climate Scenario RCP 8.5

Final note for those who read to the bottom: The 2nd edition of The Rightful Place of Science: Disasters and Climate Change (ASU/CSPO) is now in press. Stay tuned …